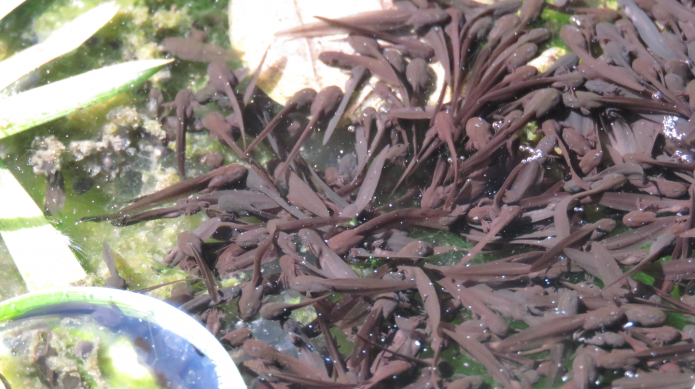 There are some people, who really think that human civilisation is a blessing even for animals, not the least for wild animals, and that wilderness is the epitome of cruelty and violence. As if everything was better than that. Only hopeless romantics admire the wild and in reality the more civilisation the better. Even to the point that humans should here and now interevene with wildlife.

Every intervention of humans with wild animals so far was a desaster. The best for all involved has always been not to intervene. If you feed wild animals, for example, because you think they suffer in winter, than you produce a lot of problems. For a start, ruminants change their digestive system in winter for a different kind of food and if this is not cared for, they suffer with digestive problems or even starve in front of stacks of food. Further, they come and stay closer together the whole winter, which causes illnesses and parasitic infections. Thirdly, they become dependent on humans, do not move much, and must be cared for from that moment on. And last but not least, they overpopulate and would destroy their habitat if nothing is done about that. If they are not fed, then they would not reproduce as much and some of them would die, but most survive, spread out in the habitat and form a happy, healthy, wild and independent population. Which is better? And which causes less suffering? The answer is obvious: not feeding.

Last weekend, I did a little walk in a narrow valley along a small river in the middle of a forest. Beautiful? Well, I was on a road. And the trees around me were all planted by humans, who had harvested the tree generations before. It was a place that had the hallmarks of human usage. But then I saw an old tree, surely 400 years old, standing there beside the street:

And I imagined the primeval forest that wood had been some 200 years ago, when this tree was in its prime. And I imagined how the place would have looked like, with so many old trees about, without roads and clear cuttings, but with wolves, bears, elks, bison and auerochs. And, yes, that place must have been like paradise then. Its aura, its aesthetic beauty, its smell, its feel. By far surpassing any place with human intervention. I would have felt so different, walking there then, with a close nit group of familiar human fellows.

Harari writes in his book brief history of humankind that before the neolithic revolution, ie before domestication and settlement building, when our forebears here at this place were hunter gatherers, they had to work only 4 hours a day to feed themselves. Harari also writes that their food was much more nutritious and healthy, the population density was far lower and therefore they had fewer illnesses. They were just generally better off. And then I look at a company I recently visited, for car cleaning. The people there work 8 hours a day cleaning cars all the time every day. For me, gathering food in the woods is what I do enjoy in my spare time. Cleaning cars I never would. Hence, the life of hunter gatherers was not just a lot less effort. Every second of that life was joyful – apart from the occasional violent conflict. But could there be anything worse than having to do tedious work all day long and rott in a city?

Harari writes that the neolithic revolution was a bad deal for humans on all fronts. And the idustrial revolution equally. What about wild animals then?

Some while back, I witnessed a driven shoot of deer in a 200 ha wood. 12 deer were shot. All had been healthy and happy individuals. Those, who argue that the wild is a place of misery for the animals, claim that we only see the healthy ones, while those suffering and dying are out of view. Where were they on this occasion? The hunt was supported by many dogs running through the undergrowth and flushing out deer. It seems to me that no sick deer could have been overlooked. As a consequence, the upshot of this hunt was that in these 200 ha of forest, 12 lively and happy deer had lived, until humans brought that to an abrupt and violent end. Were those 200 ha the big exception? Would the next 200 ha have shown a different result? I doubt it. There was nothing special about this place. Fact is that most wild animals are happy most of the time.

Now, those who insist on the misery of wilderness for animals usually point to other animal species, who supposedly suffer. Namely those who procreate in large numbers, the r strategists. Like the tadpoles. They are born in huge numbers and most die before they become frogs. True. This spring, in the Corona lockdown, I visited a little pond with hundreds of tadpoles every day for months. I saw them grow in their jelly, I saw them slip out into the pond water, I saw them gather in there in big flocks, I saw them scuttle around, diving, swimming and sometimes getting very close to each other, while others swam further away alone. I never saw any of them suffer or starve or die. It seemed to me that most were happy during those months. And it makes sense. Evolution would drive animals to be such that they are generally happy under their living circumstances, because that is conducive to them multiplying. Hence, those who feel best under their living conditions procreate more and produce offspring with similar feelings.

And one day I saw a snake in the pond, a grass snake. And most of the tadpoles, who by then had already feet and big bellies, were gone. Eventually the snake left, well fed. And he or she was happy. Most of the tadpoles had died a violent death, no doubt. There were only a dozen or so left, who had managed to hide somewhere while the snake had hunted. So, yes, 95 % of the tadpoles had only some 5 months of life. But it was a happy life, a free life, full of enjoyment. Something you cannot say about humans at a car wash factory. The tadpoles were never bored, they never had to do streneous work, they never were torn in stress between doing this or that or that first, and they never seemed to be ill. They were only stressed on that dreadful day when the snake arrived. Otherwise their lives were well worth living.

You might say, better a boring and streneous life, but long, than only 5 months with a violent end. I am not so sure. But one thing I am sure about: most of the tadpoles were happy most of the time. And if humans were to intervene in one way or other, it would only lead to misery and suffering. If you save the tadpoles from the snake, what is she or he to eat? And if you fetch them in a bucket and shelter and feed them, where will hundreds of frogs live afterwards? And their children?

Looking at the fact, that human civilisation is leading to billions of farmed animals under most miserable conditions in factory farms, where in contrast to wild animals most suffer most of the time, billions of animals hunted and killed violently by humans, billions of humans either starving or being miserable because of the daily work routine they despise and the bordom and dreadfulness of a life in a concrete jungle without apparent sense, chasing from one hedonic pleasure to the next, I clearly see life in the wild superior. In all senses of this word. Even if it might come to an untimely and violent end. Better free and happy, for a shorter while, in a largely untouched wilderness, than caught in the hamster wheel of civilisation.