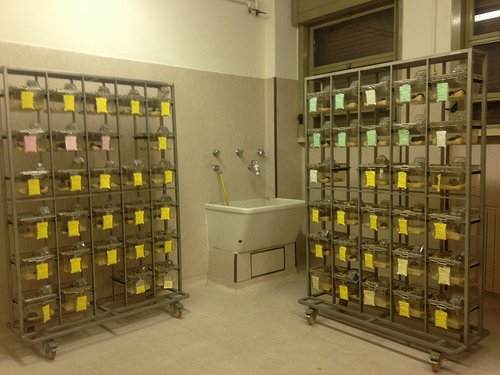 I am bewildered, to say the least, by the amount of naive anthropocentrism, which I came across reading your issues 3019 and 3020 from May 2015. It starts with an article suggesting that reality is a fiction of human consciousness. Well, reality might be a fiction of MY consciousness, but what could be so special about the consciousness of a particular group of apes that should give rise to reality collectively? What do all humans alive right now have in common that could merrit such a strange conclusion? I live with a dog, and quite frankly my conscious experience of nature, affection and social support has much more in common with his than with the one of most other humans I have ever met – not talking about those, which I have not met and will never meet, who live in totally different environments and cultures.

Your author bases this „human consciousness reality building“ idea on the example of Schrödinger’s cat in quantum mechanics. Well, that does no work. Schrödinger’s example refers to a cat, who sits in a closed box, which also contains an unstable atomic nucleus, which in turn triggers the release of poison, whenever it decays. Now, the decay process follows quantum probabilty and hence a measurement of classical physics reduces the quantum function to a real value. Your author seems to think that this measurement happens only when a human looks through the window into the box and sees if the cat is alive or dead. This suggestion is wrong on many accounts. Firstly, why does it have to be a human? Can dogs not perform measurements? What happens if a dog looks through the window and sees if the cat is dead or alive? Why are nonhuman animals always saliently excluded in this context?

But secondly, the cat is a classical object, it is never in a quantum state of superposition, being alive and dead at once. Your author suggests that everything is in a quantum state that is not being seen in this moment by a human? That is, quite frankly, utter nonsense. Why would experimenters go into so much trouble isolating molecular objects, in order to test their quantum properties, if just not looking at them would suffice? No, if anyone called human looks at an object or not, does not determine at all what state this object is in. There is a reality independently of humans out there, be it of a quantum mechanical nature of superposition or not. That is a necessary assumption for natural science to work. Everything else is superstition.

This strange type of anthropocentrism extends to another author of yours, who is suggesting that humans experience pain differently to other animals. Is it not that this used to be a suggestion to justify the racist exploitation of black people as slaves? Now, apparently, it creeps up again to justify the speciesist exploitation of nonhuman animals. But false it was and false it is today, in both situations. Your author reaches that conclusion, after having severe labour pain giving birth and later seeing a monkey with a lot less pain in the same situation. Her explanation is that humans are more social animals, so evolution might have evolved more sensitivity towards pain for them to recruit other humans for help, when they cry out louder.

Well, that does not hold up at all. Firstly, individuals express pain differently, depending on the situation. When I fell in a crevasse on a mountain, I broke my shoulder. After 36 hours, I managed to reach civilisation with my broken arm – only to immediately begin another mountain tour, because the weather was so good. Only later did I drive to a hospital and had my shoulder operated on. Other humans in other situations with similarly broken shoulders sustain that same pain very differently. It seems that there is a huge variation within one species alone, more than between the species.

Secondly, the evolutionary argument is not sound. To solicit help from other humans, it suffices to scream alloud or to show heavy bruising. That does not need to be accompanied by a more severe feeling of pain, as the case of very different bruising amongst humans after the same physical trauma shows, or the case of hares. Hares are known to scream very loud when they are being held in the mouth of a predator, so that more predators are attracted and the hare has a chance to escape in the scuffles between them. Nobody suggested so far that because of their screams, hares also suffer more, e.g. more than humans in the same situation.

And on the basis of these anthropocentrisms, it seems, another author of yours argues against the EU petition to ban animal experiments. Those experiments are so vital, she says, in order to prevent suffering and death of humans due to illnesses, which might be cured. Is it that humans come first, because their consciousness creates reality and their pain is more severe? No, those excuses have no merit, as I showed.

But the argument for animal experiments fails on another account even more. The vast majority of experiments do not aim to develop medical care methods for humans at all. New Scientist itself is full of reports on results on animal experiments, easily a dozen each issue, which have no application to human health problems at all, but which solely satisfy scientific curiosity. Indeed, statistics of the EU show that 10% of animal experiments serve to increase the efficiency of the industrial usage of farmed animals, another 10% aim for veterinary health care and more than 50% is fundamental research with no particular application in mind. The latter includes genetic engeneering and behavioural research.

If, as your article suggests, human health is the only justification for animal experiments, then most should be banned. When will New Scientist and the scientific community have the courage to actually say that in public and help restricting this practice to the few cases of actual human health related research, instead of argueing dishonestly as if all experiments were designed to spare human suffering and death?

One thought on “Anthropozentrismus in den Naturwissenschaften? Ein Leserbrief an New Scientist”