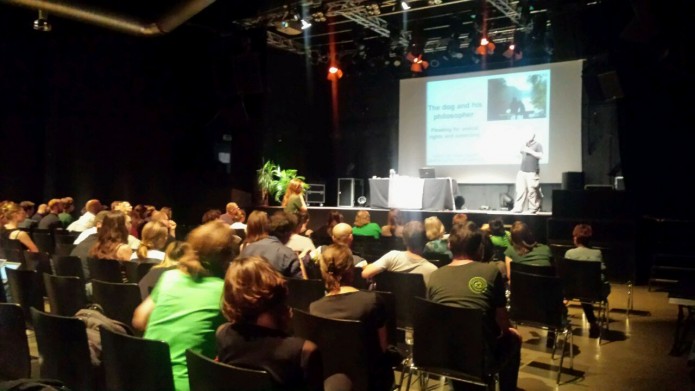 10 years ago, this discrepancy seemed overcome, mostly due to the harsh state repression that crushed much of the grassroots movement in some countries. The time of the big multinational pressure campaigns like SHAC seemed over, the organisers in prison. In came a guy called Gary Francione, who brought up the idea that only vegan outreach is the right way forward. Everything else, he claimed, like any campaign aiming for anything less than an outright vegan society, like a ban on battery cages or on wild animal circuses, was counterproductive in his view. He called VGT the biggest obstacle to achieving animal rights due to our confrontational reformist campaigns. Yes, even a ban on fur farming was in his view preventing liberation, because it was supposedly indirectly supporting the use of leather. You would be forgiven for thinking that Francione was set up by animal industries, as from all available data it was clear that what they feared most were decisive reform campaigns.

Now, also this conflict seems to have dissolved. Mostly, because the „mad abolitionists“ around Francione, as I’d liked to call them, were just talking in their ivory tower, while the political activists in the trenches were facing reality and had no alternative to pragmatic reformist approaches anyway. At the international animal rights conference in September 2016 in Luxemburg, this topic was nowhere to be seen. But another rift in animal activism seems to raise its head.

This one, though, is not as destructive and decisive, to be sure. Its a radical form of utilitarianism, one that naively just adds up „animals saved“ and any form of suffering. The background idea seems very apolitical. There is the vision of a sea of suffering in the world, never mind what causes it and who is the perpetrator, and the mission of animal advocacy is to reduce the amount of suffering and death as much as possible. So, if an animal dies in a snow avalanche or in a slaughterhouse, it is all the same. The consequence is that there seems no need to change a system of oppression of animals. The best, so the theory, is to stay within the system and alleviate suffering. The way to do that is to raise as much money as possible, have a neo liberal business style appearance, create huge organisations with hierarchical structures and invest in best possible fundraising projects.

In practice that means trying to get people to switch from chicken to pig meat, for example, as for the same amount of meat there are fewer animals suffering. At the same time, campaigns like for a ban on wild animal circuses are essentially a waste of time, as there are so few animals involved. I, on the contrary, see it the other way round. Our aim should be not to alleviate suffering per se, but to enable animals to live an autonomous and self-determined life, free from human dominance. For that we need a system change, a political change, and a ban on wild animal circuses is exactly that, while a switch from chicken to pig meat is not.

At the Animal Rights Conference 2016 in Luxemburg

The international animal rights conference in Luxemburg in September 2016 was a platform for an exchange of these ideas. I held a talk on the reason for and justification of confrontational political reform campaigns, like our campaign to ban the hunting of bred animals right now. In addition, I critisized this radical utilitarianism and delivered arguments for the right of autonomy as the prime value. Further, I summarized our hunting campaign and participated in a panel debate on exactly the utilitarianism versus autonomy, individual choice versus political system question. Also, I instigated a discussion session on campaign ideas for preventing predation in the wild, another consequence of this radical utilitarianism, I so vehemently oppose.

Still, I am worried about this rift. I have no business telling others how to run campaigns, but I observe that with humans, the rights doctrine prevents too strong an application of utilitarianism. If we are truely non-speciesist, we should uphold that concept for nonhumans too. I think it is dangerous to overlook the political dimension of animal abuse. It was hard work to turn the animal advocacy movement into a political movement, to make political parties realize that they need to have animal welfare spokespeople and an animal welfare agenda, and to make people understand that their vote in parliamentary elections could depend on their animal protection beliefs and the parties‘ track record in this regard.

I strongly suggest to keep the political system change in the focus of our animal campaign work!